Westside Writers' own April Aasheim recently announced the publication of her book The Universe is a Very Big Place, available now for Kindle at Amazon.com. 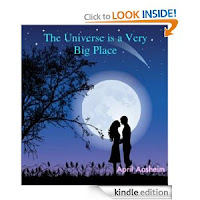 As the daughter of a fortune-telling mother and a scam artist father, Spring Ryan wants nothing more than to leave her past behind, fall in love, and live a nice, normal life. But the Universe had other plans.

For starters, the man Spring fell in love with, Trevor Donnelly, has disappeared off the face of the earth. To make matters worse her mother Lanie, an eccentric nudist, moves in ‘just until she’s done with menopause’, and her boss, Kimberly, has asked her to escort a life-sized condom around town to promote teen abstinence.

Still trying to salvage a normal life Spring agrees to marry Sam Wayne, a banker with an appreciation for books, God, and a well-mashed potato. He may not be Prince Charming, but at least he can give her the normal life she has always dreamed about.

But as her nuptials with Sam draw nearer, Spring’s life becomes even more complicated. She soon finds herself involved with three men, and has no idea what to do with any of them. It seems the Universe has a sense of humor...and just maybe, a better plan for Spring than the normal life she's always told herself she wanted.


Visit April's Author Page and visit her blog Pieces of April.
Posted by Thomas at 8:01 PM No comments: Links to this post